by [Matthew] Farrell and Shira Peltzman

As cultural icons go, the floppy disk continues to persist in the contemporary information technology landscape. Though digital storage has moved beyond the 80 KB – 1.44 MB storage capacity of the floppy disk, its image is often shorthand for the concept of saving one’s work (to wit: Microsoft Word 2016 still uses an icon of a 3.5″ floppy disk to indicate save in its user interface). Likewise, floppy disks make up a sizable portion of many archival collections, in number of objects if not storage footprint. If a creator of personal papers or institutional records maintained their work in electronic form in the 1980s or 1990s, chances are high that these are stored on floppy disks. But the persistent image of the ubiquitous floppy disk conceals a long list of challenges that come into play as archivists attempt to capture their data.

For starters, we often grossly underestimate the extent to which the technology was in active development during its heyday. One would be forgiven the assumption that there existed only a small number of floppy disk formats: namely 5.25″ and 3.5″, plus their 8″ forebears. But within each of these sizes there existed myriad variations of density and encoding, all of which complicate the archivist’s task now that these disks have entered our stacks. This is to say nothing of the hardware: 8″ and 5.25″ drives and standard controller boards are no longer made, and the only 3.5″ drive currently manufactured is a USB-enabled device capable only of reading disks with the more recent encoding methods storing file systems compatible with the host computer. And, of course, none of the above accounts for media stability over time for obsolete carriers.

Enter KryoFlux, a floppy disk controller board first made available in 2009. KryoFlux is very powerful, allowing users of contemporary Windows, Mac, and Linux machines to interface with legacy floppy drives via a USB port. The KryoFlux does not attempt to mount a floppy disk’s file system to the host computer, granting two chief affordances: users can acquire data (a) independent of their host computer’s file system, and (b) without necessarily knowing the particulars of the disk in question. The latter is particularly useful when attempting to analyze less stable media.

Despite the powerful utility of KryoFlux, uptake among archives and digital preservation programs has been hampered by a lack of accessible documentation and training resources. The official documentation and user forums assume a level of technical knowledge largely absent from traditional archival training. Following several informal conversations at Stanford University’s Born-Digital Archives eXchange events in 2015 and 2016, as well as discussions at various events hosted by the BitCurator Consortium, we formed a working group that included archivists and archival studies students from Emory University, the University of California Los Angeles, Yale University, Duke University, and the University of Texas at Austin to create user-friendly documentation aimed specifically at archivists.

Development of The Archivists Guide to KryoFlux began in 2016, with a draft released on Google Docs in Spring 2017. The working group invited feedback over a 6-month comment period and were gratified to receive a wide range of comments and questions from the community. Informed by this incredible feedback, a revised version of the Guide is now hosted in GitHub and available for anyone to use, though the use cases described are generally those encountered by archivists working with born-digital collections in institutional and manuscript repositories.

The Guide is written in two parts. “Part One: Getting Started” provides practical guidance on how to set-up and begin using the KryoFlux and aims to be as inclusive and user-friendly as possible. It includes instructions for running KryoFlux using both Mac and Windows operating systems. Instructions for running KryoFlux using Linux are also provided, allowing repositories that use BitCurator (an Ubuntu-based open-source suite of digital archives tools) to incorporate the KryoFlux into their workflows.

“Part Two: In Depth” examines KryoFlux features and floppy disk technology in more detail. This section introduces the variety of floppy disk encoding formats and provides guidance as to how KryoFlux users can identify them. Readers can also find information about working with 40-track floppy disks. Part Two covers KryoFlux-specific output too, including log files and KryoFlux stream files, and suggests ways in which archivists might make use of these files to support digital preservation best practices. Short case studies documenting the experiences of archivists at other institutions are also included here, providing real-life examples of KryoFlux in action.

As with any technology, the KryoFlux hardware and software will undergo updates and changes in the future which will, if we are not careful, have an effect on the currency of the Guide. In an attempt to address this possibility, the working group have chosen to host the guide as a public GitHub repository. This platform supports versioning and allows for easy collaboration between members of the working group. Perhaps most importantly, GitHub supports the integration of community-driven contributions, including revisions, corrections, and updates. We have established a process for soliciting and reviewing additional contributions and corrections (short answer: submit a pull request via GitHub!), and will annually review the membership of an ongoing working group responsible for monitoring this work to ensure that the Guide remains actively maintained for as long as humanly possible. 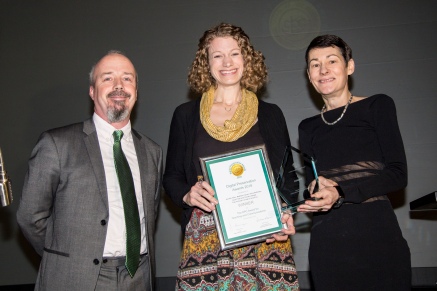 Shira Peltzman is the Digital Archivist for the UCLA Library where she leads a preservation program for Library Special Collections’ born-digital material. Shira received her M.A. in Moving Image Archiving and Preservation from New York University’s Tisch School of the Arts, and was a member of the inaugural cohort of the National Digital Stewardship Residency in New York (NDSR-NY).

Hi, SAA ERS readers! My name is Ashley Blewer, and I am sort of an archivist, sort of a developer, and sort of something else I haven’t quite figured out what to call myself. I work for a company for Artefactual Systems, and we make digital preservation and access software called Archivematica and AtoM (Access to Memory) respectively. My job title is AV Preservation Specialist, which is true, that is what I specialize in, and maybe that fulfills part of that “sort of something else I haven’t quite figured out.” I’ve held a lot of different roles in my career, as digital preservation consultant, open source software builder and promoter, developer at a big public library, archivist at a small public film archive, and other things. This, however, is my first time working for an open source technology company that makes software used by libraries, archives, museums, and other organizations in the cultural heritage sector. I think this is a rare vantage point from which to look at the field and its relationship to technology, and I think that even within this rare position, we have an even more unique culture and mentality around archives and technology that I’d like to talk about.

Within Archivematica, we have a few loosely defined types of jobs. There are systems archivists, which we speak of internally as analysts, there are developers (software engineers), and there are also systems operations folks (systems administrators and production support engineers). We have a few other roles that sit more at the executive level, but there isn’t a wall between any of these roles, as even those who are classified as being “in management” also work as analysts or systems engineers when called upon to do so. My role also sits between a lot of these loosely defined roles — I suppose I am technically classified as an analyst, and I run with the fellow analyst crew: I attend their meetings, work directly with clients, and other preservation-specific duties, but I also have software development skills, and can perform more traditionally technical tasks like writing code, changing how things function at a infrastructure level, and reviewing and testing the code that has been written by others. I’m still learning the ropes (I have been at the organization full-time for 4 months), but I am increasingly able to do some simple system administration tasks too, mostly for clients that need me to log in and check out what’s going on with their systems. This seems to be a way in which roles at my company and within the field (I hope) are naturally evolving. Another example is my brilliant colleague Ross Spencer who works as a software engineer, but has a long-established career working within the digital preservation space, so he definitely lends a hand providing crucial insight when doing “analyst-style” work.

We are a technical company, and everyone on staff has some components that are essential to a well-rounded digital preservation systems infrastructure. For example, all of us know how to use Git (a version control management system made popular by Github) and we use it as a regular part of our job, whether we are writing code or writing documentation for how to use our software. But “being technical” or having technical literacy skills involves much, much more than writing code. My fellow analysts have to do highly complex and nuanced workflow development and data mapping work, figuring out niche bugs associated with some of the microservices we run, and articulating in common human language some of the very technical parts of a large software system. I think Artefactual’s success as a company comes from the collective ability to foster a safe, warm, and collaborative environment that allows anyone on the team to get the advice or support they need to understand a technical problem, and use that knowledge to better support our software, every Archivematica user (client or non-client), and the larger digital preservation community. This is the most important part of any technical initiative or training, and it is the most fundamental component of any system.

I don’t write this as a representative for Artefactual, but as myself, a person who has held many different roles at many different institutions all with different relationships to technology, and this has by far been the most healthy and on-the-job educational experience I have had, and I think those two things go hand-in-hand. I can only hope that other organizations begin to narrow the line between “person who does archives work” and “technical person” in a way that supports collaboration and cross-training between people coming into the field with different backgrounds and experiences. We are all in this together, and the only way we are gonna get things done is if we work closely together.